The DeMolay Congress is the Senate-style body where two voting delegates represent each DeMolay Jurisdiction. The delegates meet once a year and elect an International Master Councilor and an International Congress Secretary, who lead and serve as the heads of the body for a time span of one year.

Cooper Crabtree of Oklahoma was installed as the 56th International Master Councilor in Orlando, FL on June 25th, 2022. 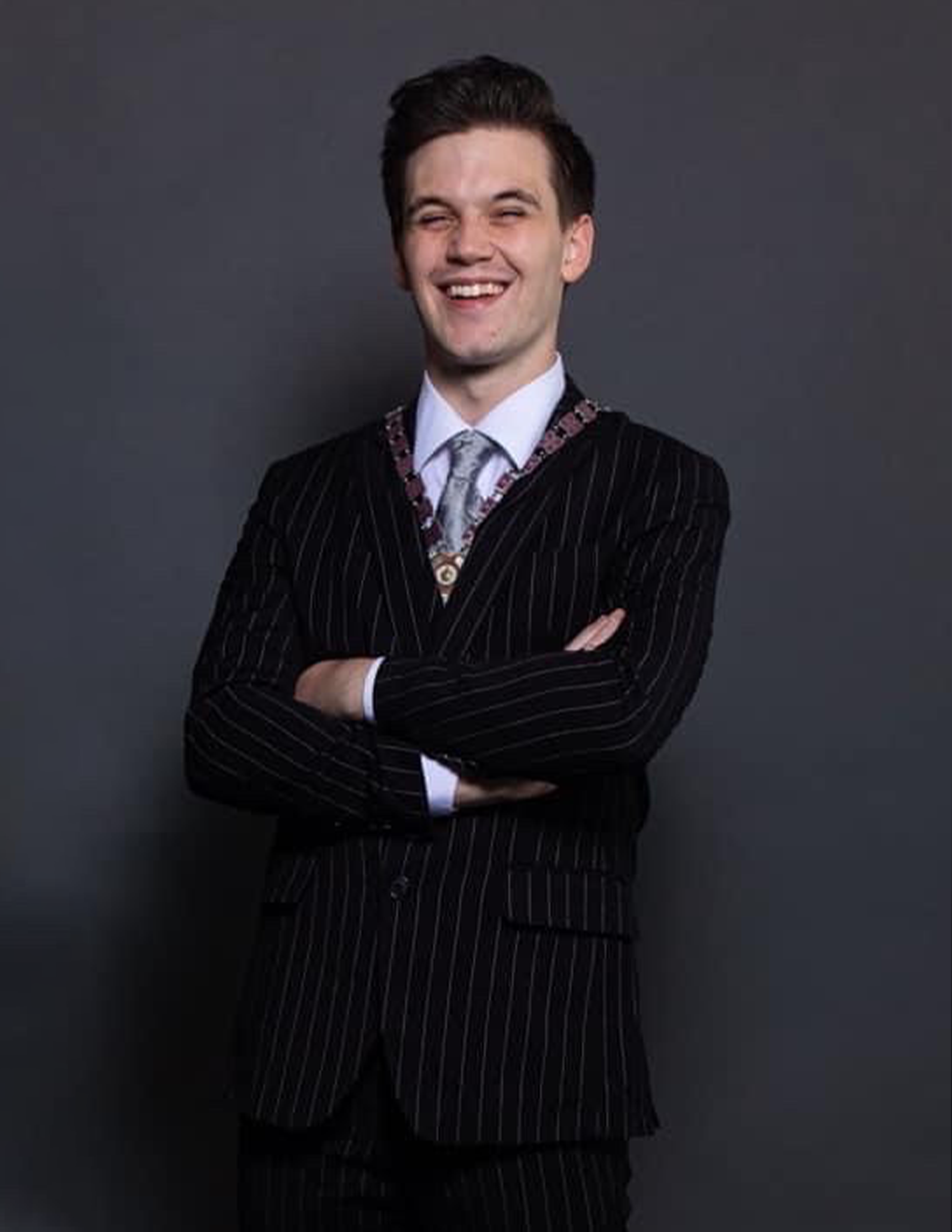 Sebastian Pesquera of Connecticut was installed as the 56th International Congress Secretary in Orlando, FL on June 25th, 2022. 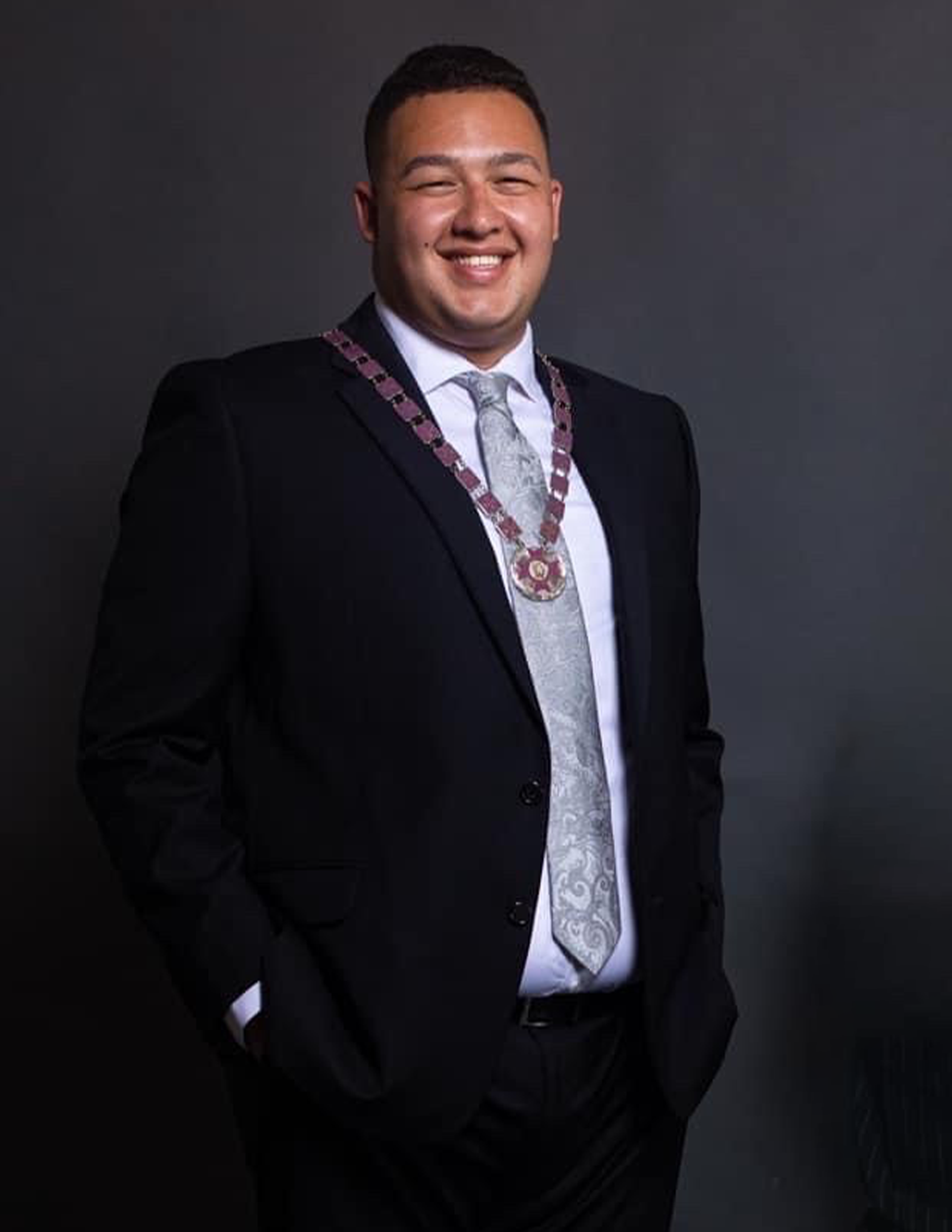 Jonathan (Jon) comes from a family with strong ties to the Masonic family. His Grandfather was a very active Mason who was study partners and attended Lodge meetings many years ago with President Harry Truman in Independence, MO.

Jon was raised as a Master Mason at his home Lodge, Collins #19 in Fort Collins, Colorado and is now also a member of Golden City Lodge #1 in Golden Colorado. He currently sits as the chairman for the Colorado Grand Lodge Youth Committee, he is a trustee of the Colorado DeMolay Foundation and has served as the Chairman of the Colorado Grand Lodge Markers, Memorials, and Monuments committee for over ten years. He is the recipient of several honors and awards for his work which include The Grand Master’s Award of Excellence, The Grand Master’s Distinguished Service Award, The Grand Lodge Meritorious Service Award, The Cryptic Masons Humanitarian Award, and has received, for his distinguished service to Freemasonry, the honor of being named Companion of the Temple by the Grand Encampment of the Knights Templar. He has also earned philanthropic and service recognition in other areas of Freemasonry and within his community. Jon is a member of the Denver Consistory of the Ancient & Accepted Scottish Rite and has been elevated to the rank & decoration of Knight Commander of the Court of Honor. He is also a member of El Jebel Shrine and Mt. Zion Order of Eastern Star.

The love for DeMolay that Jon holds did not begin as a youth. Unfortunately, he was not introduced to the Order of DeMolay until having a son of his own, who attended many Masonic events with him, had heard about the organization, and could not wait to join when he was old enough to do so. Once his son joined, Jon and his wife took a very active role at the Chapter level. He became Chapter Chairman and then Chapter Advisor, which he still says is one of his favorite roles in DeMolay. Not too long after, he and his wife took positions on the State Staff and have remained busy throughout the state since. Dad Sellars is now the Executive Officer of Colorado and serves as the Grand Senior Councilor for DeMolay International.  Colorado has seen growth for more than ten years consecutively under his leadership. Prior to his appointment as Grand Junior Councilor, Dad Sellars served as a trustee and Treasurer of the DeMolay Foundation. He has worked on several committees and continues to remain very active with his state staff, state officers, advisors, and members of his jurisdiction. He is a recipient of three Grand Master’s Eagles, the Horizon Award, Executive Officer of the Year, and most recently the Visionary Leader Award. His favorite honor, however, has been having the satisfaction of watching his son and the sons of others benefit from all that DeMolay offers.

Jon and his wife Kellie live in Castle Rock, Colorado, where they spend their free time with family. Taylor, their daughter, has recently blessed them with their first Grandchild, a beautiful and healthy granddaughter. Mason continues to work while also staying very active behind the scenes for Colorado DeMolay. He serves on committees for DeMolay International, and is currently helping with DLC in Oklahoma. Mason continues to dedicate much of his time to pursuing his path as a professional athlete in the world of MMA. Other than DeMolay, Dad Sellars enjoys travel, fishing, working outdoors, and spending time with his family. 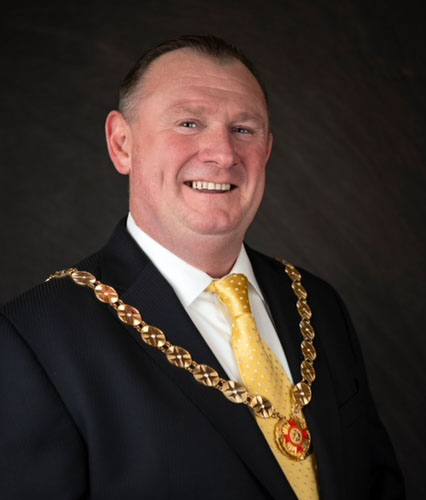 Terry Peters was initiated into San Jose Chapter in San Jose, California in February 1965 where he started a lifelong relationship with DeMolay.  San Jose Chapter has the distinction of being the first Chartered Chapter in California.  His family has been active in Freemasonry and the Masonic Family for several generations.  Terry’s father was instrumental in encouraging Terry to join DeMolay after learning about DeMolay at one of his Masonic Lodge’s stated meetings.

After Terry became a majority member of DeMolay, he became active again with DeMolay when his son was initiated into DeMolay several years later.  Terry instantly became active as the Pleasanton Chapter Advisor and soon after as the Pacific East Bay Division Advisor.  Later, Terry served the Jurisdiction in several capacities including Convention Director, Pacific Coast DeMolay Leadership Camp Advisor, Jurisdiction Advisor and the Assistant Executive Officer.  In 2017, he was appointed Executive Officer for Northern California and Hawaii. He also serves as a trustee on the DeMolay Foundation of California.   Terry has received several awards during his DeMolay journey including Cross of Honor, Chevalier, Legion of Honor, the Guild of the Leather Apron, and the Gordon McBride Membership Award.

Terry became a Member of the International Supreme Council (ISC) in 2001 and has served on several committees including Ritual, Nominations and Convention Planning.  He was appointed Chair Of Convention Planning where he served for five years until he was appointed Executive Officer in 2017.  Terry also served as a member of DeMolay International’s Board of Directors as a Region VIII Representative for two consecutive terms.  He is the recipient of DeMolay International’s Grand Cross.

Terry is a member and officer of Pleasanton Lodge #321, Free and Accepted Masons, where he is currently serving as the Senior Warden.  He is also a member of Aahmes Shrine in Livermore, San Francisco Scottish Rite Valley, a Past Patron, Semper Fidelis Chapter # 135, Order of Eastern Star, and an associate member of the San Francisco Chinese Acacia Club.

Terry is a graduate of San Jose State University in San Jose, CA with a degree in Business Human Resources.  He retired as an IT Senior Technical Director after 30+ years with AT&T.  He and his wife, Evonne, have two grown and married children, Andrea and Scott, and 4 Grandsons, Austin, Andrew, Mason and Colton.  Andrea is a Past Honored Queen of Job’s Daughters, a majority member of Rainbow for Girls, past Chapter and Division Sweetheart, and a member of Semper Fidelis Chapter, Order of Eastern Star.  Scott is a Past Master Councilor of Pleasanton Chapter, Pacific East Bay Division, and Northern California DeMolay Jurisdiction. Terry’s oldest Grandson, Austin, is a third generation DeMolay. Terry loves to travel, garden, and spend time with his family. Terry and Evonne are active members of Lynnewood United Methodist Church in Pleasanton. 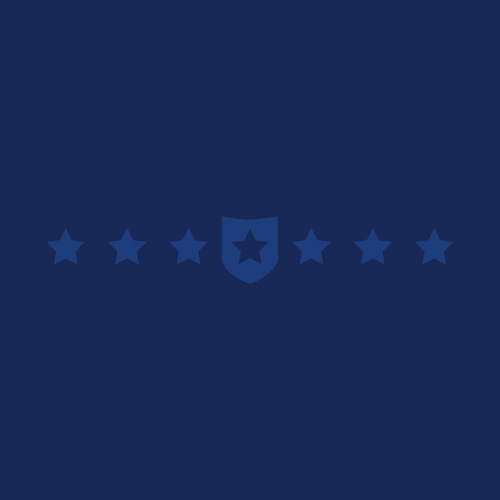 Jeffery A. Brunson of Washington was installed as Grand Junior Councilor of DeMolay International in Orlando, FL on June 25th, 2022.

Gregory A. Chiles of Indiana was installed as Grand Treasurer of DeMolay International in Dallas, TX on June 19th, 2021.

Dad Chiles received the degrees of DeMolay in December 1972 in Beech Grove Chapter.  He served as Master Councilor in 1976 while a Senior at Warren Central High School.  His DeMolay Honors include Blue Honor Key, Representative DeMolay, Chevalier, Legion of Honor and Cross of Honor.  He served Indiana DeMolay as State Master Councilor in 1978-1979.  Dad Chiles was appointed as Executive Officer for Indiana in November, 2003 and was elected an Active Member of the Supreme Council at the 85th  Anniversary in 2004.  Dad Chiles retired as Executive Officer in June, 2018.   Prior to assuming the role of Executive Officer, Dad Chiles served as Conclave Director for Indiana DeMolay for 10 years.  He has served two consecutive terms on the Board of Directors of DeMolay International as the Region IV Representative and was Chairman of the Executive Officers Conference in 2009.  He was elected Grand Master on June 23, 2012.  Dad Chiles has served as Chairman of the Budget & Finance Committee since 2014.  He was elected Grand Treasurer on June 29, 2019.

A graduate from Butler University, Dad Chiles has a degree in Business Management and is an avid Bulldog Basketball fan.  In 1990, Dad Chiles passed his CPA exam.  He has been the Business Manager for St. Simon the Apostle Catholic Church May, 2003.

Greg and his wife Dawn live in Carmel and have one grown daughter, Allison.  When not at work or a DeMolay event, Dad Chiles enjoys jogging and officiating basketball and softball games.  A licensed Indiana High School official, Dad Chiles works school games, as well as, travel ball. 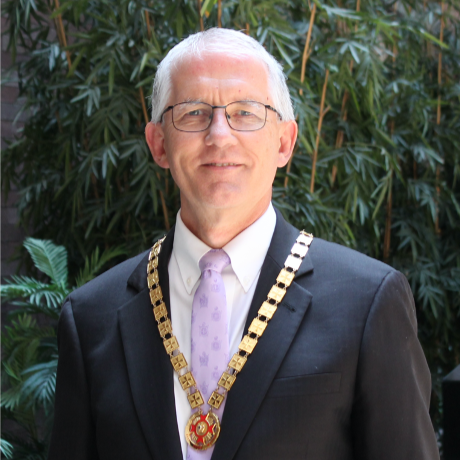 Steve Crane was born in San Diego, California where his family farm in the Alpine California area. Steve Crane moved to Sandpoint, Idaho in 1981 and joined Lakeside Lodge #42. He served as Master of the Lodge in 1993, 1994, and 1995. He was appointed District Deputy in 1994 and then appointed to the progressive Grand Lodge line in 1996. He continued through Idaho’s long progressive line until his employer moved him into the global headquarters in Topeka, Kansas in 2002. Steve Crane retired as the manager of competitive intelligence from Hill’s Pet Nutrition, a division of Colgate Palmolive after 30 years in March of 2011.

Having received his Masters in Organizational Administrative Management from the University of Phoenix, he taught as an adjunct professor at Baker University, the oldest university in Kansas, which was established in 1858. He taught Organizational Management and International Marketing in Baker’s MBA program for 8 years.

While his daughters were involved in Job’s Daughters in Sandpoint, Idaho, his son clearly would not be eligible. Consequently, Steve Crane started a DeMolay Chapter in Sandpoint and served as Chapter Dad, Chapter Chairman, and finally regional Executive Officer for Idaho before being transferred to Kansas in 2002. In 2003 he was appointed Executive Officer of Kansas. While serving Kansas he attained positive growth each year.

Steve Crane served on various committees for DeMolay International, and served as President of the DeMolay Foundation until his election as Junior Grand Councilor in 2013. Steve served as WM of Topeka Lodge #17 in 2011. He is currently a member of Lakeside Lodge #42, Sandpoint Idaho, Bannack Lodge 3-7-77 in Bannack Montana, Topeka Lodge #17 Topeka Kansas. He received his honorary 33rd as a member of the Coeur D’Alene Idaho Valley of Scottish Rite, member of Arab Shrine in Topeka Kansas, Calam Shrine in Lewiston Idaho, and Ankara Grotto in Kansas City Kansas. Steve currently serves as Chairman of Foreign Relations for the Grand Lodge of Kansas.

Steve Crane has three daughters, one son, two step daughters, 12 grand daughters and 4 grand sons who are scattered from San Diego to Quebec. He lives with his best friend and wife Dr. Marilyn Colgan in Clinton Kansas where they raise beef cattle, corn and soybeans on the family farm. 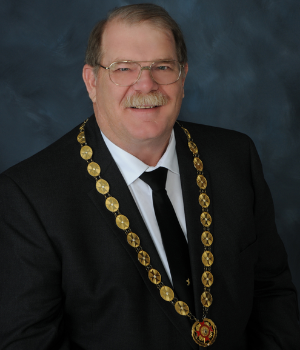 The following slate of officers and directors were unanimously elected to serve on the Board of Directors for the current term:

The Board of Directors consists of the following: one Class 1 member as a representative from each of the DeMolay regions; and the Grand Master, Grand Senior Councilor, Grand Junior Councilor, Grand Secretary, Grand Treasurer, a representative selected from the Executive Officers’ Conference, and two Class 6 members of DeMolay International. The Chairman of the Jurisprudence and Legislation Committee, the Chairman of the Budget and Finance Committee and the General Counsel shall be members without a vote.

Director of IT & Media